Rugby in Krakow 15 Aside

Although Poland is not a major player on the rugby map of the world, Krakow can actually boast having one of very few Polish premier league rugby clubs in Poland! Why not take advantage of it and organise your rugby tour to Krakow in Poland and face the local opposition?! We’ve got seniors, old boys & different skill levels – from amateurs to semi–pros!

Apart from the game itself, the essence of any good rugby tour is certainly the social side after the fixture. And we can tell you that guys from Juvenia Krakow rugby club are certainly experts in their field which coupled with Krakow’s fantastic nightlife are the ingredients for a fantastic rugby tours.

Drop us a line and we’ll arrange accommodation, fixtures, and additional activities for your Krakow rugby tour.

Some facts about rugby in Poland

Every 3rd weekend of June will see Krakow play host to the annual Krakow Rugby Festival, which is a social rugby tournament hosted jointly by our sister company Sports Tours Poland, specialists in organising rugby tours, and Juvenia Krakow Rugby Club. It promises to be an epic weekend of great rugby and even greater socialising, with a number of different activities planned as part of the event. If you’re looking for one of the best top rugby tours then this is certainly the event for you. Whether you’re a decent rugby team, or just a group of mates wanting to get together for a one off tournament then this is perfect for you.

The 2019 edition was a great success, as teams from the Ireland, France, UAE, UK and Poland came together to compete in a 10 aside tournament at Juvenia Rugby Club. And 2020 promises to be even better with more teams, more beer, more food, and most importantly even more fun. For the 2nd time there will also be a women’s tournament taking place at the same time, again with teams from all over Europe and even further afield coming to compete.

The festivities begin on the Friday when the teams will be arriving throughout the day, before heading off for the opening party in the evening. This takes place at a centrally located bar where there will be live music, as well as the option for an open bar.

The rugby then begins on the Saturday morning with the commencement of the group matches for both the men’s and women’s tournaments. After the day’s rugby there’s a chance to go back to the accommodation and get your glad rags on before hitting the town for the gala dinner, with plenty of food and of course beer in a trendy central restaurant. 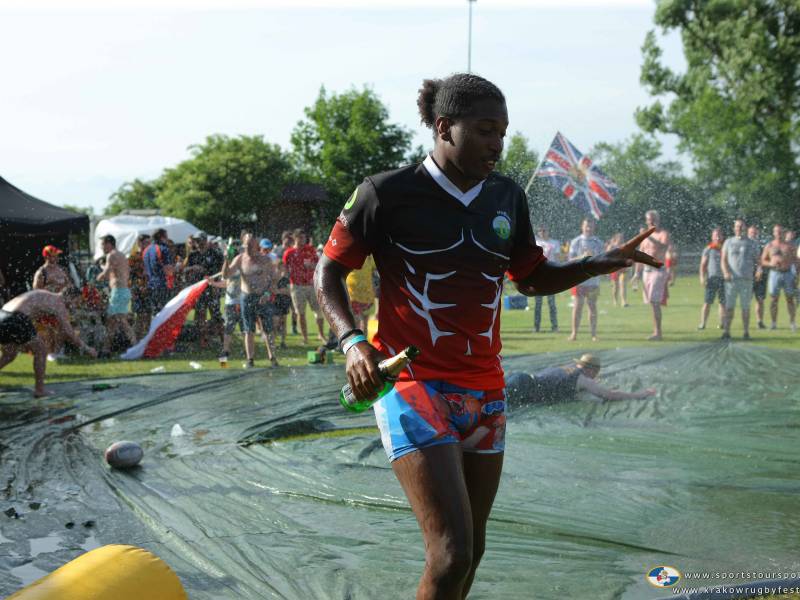 Sunday sees the final matches taking place, with a big pitch-side party to follow which is the perfect way to round off the weekend and what will have no doubt been one of the best rugby tours you have ever experienced.

If you’re interested in coming to join the Krakow Rugby Festival 2020 then prices start from just 63 GBP / pp.

How to a Book

What are the average prices in Krakow/Poland?

On average prices in Poland are three 2-3 cheaper than UK prices. For what you would spend on one night out in London you can spend two or three days and nights full of entertainment in Krakow. For example, a pint in a good pub costs about 2 GBP, a pack of Marlboro costs 3 GBP and a 2 course meal in high street restaurant is normally about 10 GBP.

What about the safety?

Krakow is a student city that receives a high amount of visitors annually - it’s one of the Europe’s top travel destinations. As a result Krakow is safe, and the authorities do their best to make sure it stays that way. In general there's less trouble here on a weekend than there is in most places back home. That said common sense is a virtue and if you look for trouble, you will likely find one

What about the healthcare?

In case of illness or injury you will receive prompt and professional medical attention. Visitors from EU member countries are covered by their own national health service. Please remember to take your EHIC card with you when travelling, as otherwise you will be asked to pay for your treatment.

There's a very large student population from all over Europe. So the atmosphere is friendly, and you will have no problems communicating - around 80% of young people speak English, as do staff in all the bars and shops in the town centre. Although popular with visitors, Krakow is not overcrowded with them. As a result Krakow has an authentic feel, and if you want you should find it easy to chat with the locals. Bearing in mind the quality of the women that's definitely a plus!

What is the weather usually like in Krakow/Poland throughout the year?

On the whole the weather in Krakow is not too different than the UK, though not as rainy and windy. Spring and autumn and pretty similar to back home though there is a larger variation in temperatures, the summer is slightly hotter and the winter colder.

What about the places?

There are a bewildering variety of pubs, clubs and restaurants concentrated in two areas which are side by side- in the biggest market square in Europe and in the old Jewish district. In a weekend you won't cover even a fraction of the places worth visiting in either (although you can enjoy getting very drunk trying!). Normally people start to go out around 9 in the evening, and normally places shut at 4-5 in the morning (though there are after-hours clubs open till 7).

Are flights included in the price of packages?

Nope, they aren't - bearing in mind the vast number of cheap carriers offering flights to Krakow, you can get your flights arranged by yourself in a quick and cheap way

What happens if members of our group arrive at various times in Krakow?

We usually only organise one airport transfer in each direction. However we are very flexible and accommodating so just ask.

What about transport to / from the airport?

Feel free to organize your own transport, however it will probably be easier and cheaper for you to take the transport service that we offer.

What are the best options open to me in terms of getting local currency - Polish Zlotys (PLN)?

This depends on how you like to get your money. Some people like to use the cash machines / ATM's and some by exchanging cash. If you prefer to use cash machines we can take you to them once you get here. You shouldn't have any problems in using a UK credit/debit card in the cash machines over here. Normally your bank will charge a certain % fee of the amount you withdraw plus currency exchange rate. If you prefer to exchange your cash, you can use one on multiple currency exchange offices called “kantor” which are located in the city center. Normally the best rates are offered in Slawkowska street, but do ask for advice on the day of your arrival, and our Rep will help you.

What is a typical budget for a weekend?

It all depends on you but Krakow is a city where a pint in a good pub costs about 2GBP, a good meal with drink about 10 GBP, nightclub entrance 2GBP , strip club entrance about 5-10 GBP and public transport costs approx.70p to anywhere in the city.

We don’t mean to brag, but we probably have the market’s friendliest booking conditions: