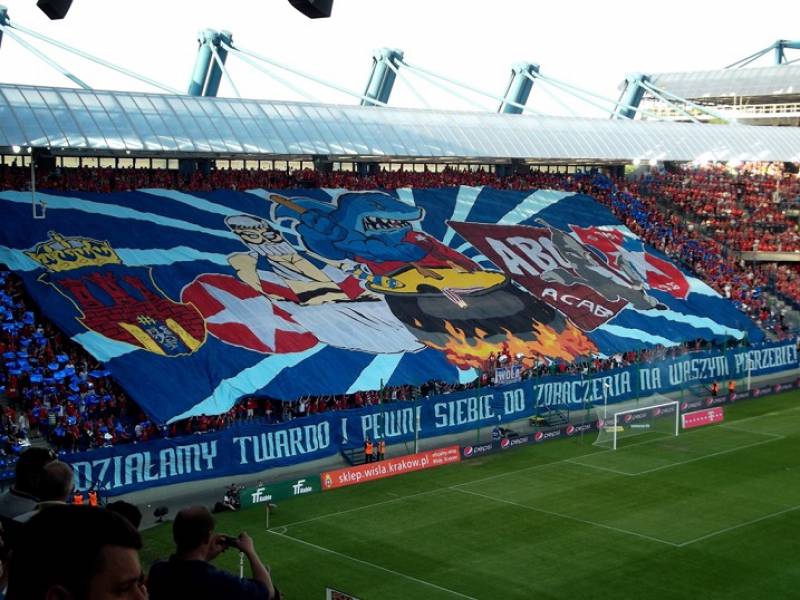 Ever since I’d been living in Poland I’d heard a lot about the Holy War and how it was either a must see event or something to avoid at all costs, depending on who you speak to. The Holy War of course refers to the derby match between Krakow’s top two sides; Wisła Kraków and Cracovia.

Having been an avid football fan my entire life I decided I just had to see the derby match for myself. The game was to take place at Wisła’s Henryka Reymana stadium; a smart 33,000 all-seater stadium located just a stone’s throw away from Cracovia stadium.

The rivalry between the clubs is considered to be one of the fiercest in Europe, dating back to 1908 when the first Krakow derby was played with the game ending in a 1-1 draw. Since then Wisła Krakow have had the upper hand, defeating their rivals 83 times in comparison to Cracovia’s 60 victories. 43 games have ended in a draw. The game earlier in the season had ended up  1-1. Since then Wisla had been on an impressive run and were sat in second place in the table whilst Cracovia were in ninth having been promoted to the Ekstraklasa the year before.

As I walk towards the stadium there is a heavy police presence everywhere, with no sign of the Cracovia fans who had already been frog marched to the stadium en masse by a large contingent of riot police earlier in the day. After a quick pat down by stadium security I enter the stadium and take my seat situated in the top tier near the halfway line. Although there’s still 30 minutes to go until kick off the atmosphere is bouncing, with Wisła’s ultras behind the goal to my right and Cracovia’s fans behind the opposite goal to my left. Both ends are a vast array of coloured banners, both supporting their own team and those to cause offence to the opposition.

After much anticipation the game kicks off with both teams kicking towards their own fans. The opening half an hour is a tight affair with neither side wanting to give away too much. The noise from the stands is deafening as both sets of fans sing non-stop. The strength of some of the tackles was also showing how much this game meant to the players as well as the fans.

With 34 minutes played Wisła are awarded a free kick about 30 yards from goal by the right touchline. Semir Stilic steps up and swings the ball into the box where it’s met by a giant leap from Wisła captain Adam Glowacki with his flicked header flying beyond the grasp of Cracovia ‘keeper Krzysztof Pilarz. The noise is deafening as the veteran defender runs away in celebration towards the Ultras where he is mobbed by his teammates.

Within five minutes Wisła double their lead, this time Pawel Brozek turning smartly on the edge of the box before feeding the impressive Stilic who calmly brought the ball down before slotting past the helpless Pilarz.

Cracovia were in pieces after the two quick-fire goals and they desperately tried to find a way back into the match before halftime, roared on by their fans who didn’t stop singing for the entire 45 minutes. They were unable to find a way past a resilient Wisła defence though, who could boast the best defensive record in the league before the game, and went in 2-0 down at the break.

The second half begins with Wisła sitting back and trying to contain their lead with the visitors struggling to trouble Miskiewicz in the Wisła goal. Midway through the half the Wisła fans bring out some flares before some of them are launched onto the pitch (a move which would eventually see them punished with a fine and part closure of the stadium for the next game).

Wisła’s resistance is eventually broken on 71 minutes when Saidi Ntibazonkiza unleashed an unstoppable shot from 20 yards into the top corner. The atmosphere changed in the stadium as suddenly Cracovia were back in with a chance.

Cracovia threw everything at Wisła in the remaining minutes as they searched for an equalizer, however they were hit with a counter attack with two minutes to play which resulted in Lukasz Gargula bursting into the box and slamming the ball home to round off an impressive victory for his side which would take them to the summit of the Ekstraklasa table.

The final whistle brought wild celebrations for the home fans, with the passion shown making me realize that this really wasn’t ‘just another game’. ‘It’s time to say goodbye’ was played through the stadium speakers at the final whistle, giving fans a chance to torment the Cracovia followers by waving them off.

All in all I really enjoyed my first experience of the Krakow derby. I’ve been to matches all over Europe and I don’t think I’ve ever seen such passion and strong support shown by fans anywhere in the world. I’m already looking forward to next season’s ‘Holy war’.