Whatever happens on the stag party stays on the stag party’ is a fairly common rule nowadays, however over the years we’ve heard a number of embarrassing, cringe worthy and usually downright hilarious anecdotes from stags in Krakow. In fact, a large number of lad stories tend to happen on stag parties. Here are some of the more memorable ones, names removed of course! 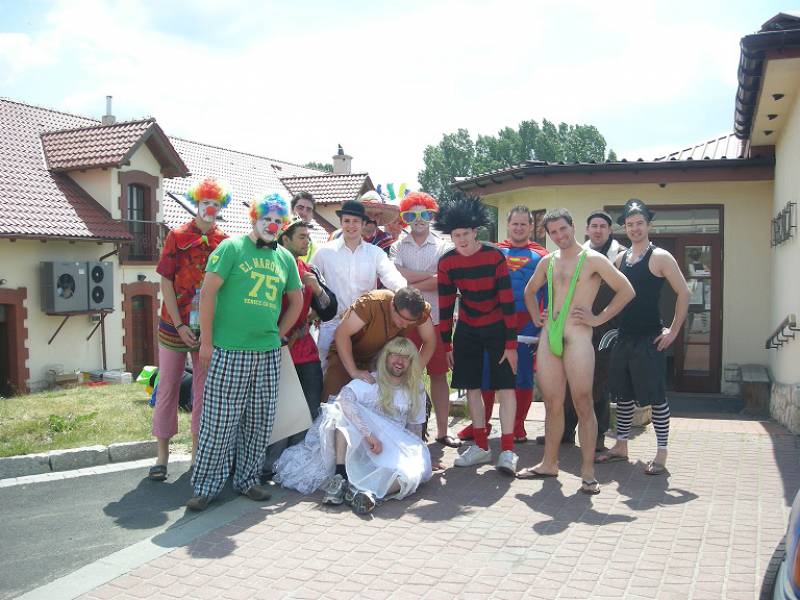 One group we had here on a Krakow stag do a few years ago had the luck of bumping into a hen party on the last night that had also come from England.  After the two groups me and spent some time together in a club two of them decided they wanted to ‘get to know’ each other better so they left their friends in the club and headed back to the guy’s hotel. Once inside they started to mess around on the bed before the guy started to get a funny feeling in his lower bowels, probably due to two days on a mostly beer and sausage diet. He quickly headed to the en suite for what turned out to be, as he described afterwards, ‘the longest, most painful, and most eventful sh!t of his life’. The two days festivities had obviously taken effect on the poor bloke, and as he was washing his hands after almost a full 45 minutes of painful bowel evacuation he suddenly remembered something. The girl on his bed! He emerged from the bathroom only to be greeted with an empty room and a 20 quid note she had taken from his wallet with the word ‘TWAT’ written in marker pen on it. He’d been so long relieving himself the poor girl had obviously thought he was hiding from her in the toilet. Oops!

As you can read in the information for our spa detox activity, ordering a wax for the stag can be great fun, or even taking some wax strips with you and getting girls to wax a certain part of his body can also work. One group decided to go a bit further though, daring the groom-to-be to go into a salon and get an all-over wax (including the dreaded back, sack and crack). Never one to shy away from a challenge, the stag took them up on the dare and ended up as bald as the Mitchell brothers. All was fine until a few days after when he had a reaction to the waxing which resulted in in-grown hairs, particularly around his more intimate areas. The reaction became so bad in fact that the guy was in agony and was unable to consummate the marriage following the ceremony. Let’s just say the bride wasn’t exactly the happiest person in the world that night!

Not actually a Krakow based stag story but a very well-known lad story nonetheless. After a few beers the stag was feeling slightly worse for wear and fell over in the street. One of the group was a doctor and decided to plaster the stags leg. So, basically the groom spent 2 weeks in a cast which meant he was on crutches. The wedding party even went to the trouble of adjusting the grooms suit to accommodate the cast. Despite this the wedding went well, all until the drunk best man got on the mic to thank everyone for coming and to tell the groom he had not actually broken his leg at all….it was just a joke! Basically they did it intending to tell him before the wedding but it all went too far and they bottled it. Obviously this ended up with one pissed off bride as the wedding photos had been ruined due to the fact the groom was on crutches, not to mention the trouble of adjusting the grooms suit and the two weeks he had spent hobbling around on crutches.

When one group having their stag party in Ireland didn’t receive their deposit back the bride to be was quick to jump to the defense of the group. She publically slammed the hotel on Facebook and demanded some answers. She eventually received some, however I’m sure it was not what she was expecting. Please see the video below to find out how it turned out…

Ok so this one is not technically a stag story, but it’s hilarious anyway and a particular favourite here at Party Krakow so I had to share it one more time. The following is taken from the New York Times

“In retrospect, lighting the match was my big mistake, but I was only trying to retrieve the gerbil”, Eric Tomaszewski told bemused doctors in the Sever Burns Unit of Salt Lake City Hospital.

Tomaszewski, and his homosexual partner Andrew “Kiki” Farnum, had been admitted for emergency treatment after a felching session had gone seriously wrong.  “I pushed a cardboard tube up his rectum and slipped Raggot, our gerbil, in,” he explained.  “As usual, Kiki shouted “Armageddon” my cue that he’d had enough.  I tried to retrieve Raggot but he wouldn’t come out again, so I peered into the tube and struck a match, thinking the light might attract him.”

At a hushed press conference, a hospital spokesman described what happened next.  “The match ignited a pocket of intestinal gas and a flame shot out of the tube, igniting Mr Tomaszewski’s hair and severely burning his face.  It also set fire to the gerbil’s fur and whiskers, which in turn ignited a larger pocket of gas further up the intestinal tract, propelling the gerbil out like a cannonball.

Tomaszewski suffered second-degree burns and a broken nose from the impact of the gerbil, while Farnum suffered first and second degree burns to his anus and lower intestinal tract.

It's been emotional!!
All 13 of us couldn’t speak more highly of the service provided by Party Krakow, everything ran like clockwork and was very reliable.The guides prov...
John Gladwin