Vodka much to most people’s surprise originated in Poland and not Russia as popular folklore would have us believe. Sure, in the media, films and literature the West understood that vodka is and was a Russian traditional beverage because after WWII Russia created the USSR and Soviet regime of which Poland had to endure. The fact is that vodka was produced and officially recorded in Poland as early as 1405 by the Sandomierz Council and used for medicinal purposes. This version of vodka contained a lower amount of alcohol in respect to the locals drinking version which was called gorzałka as it gave a burning sensation in the throat of the drinker due to the extra distillation process increasing its alcohol volume. Vodka started out as a medicine which physicians claimed to cure various diseases and ailments such as fertility problems and also used as a cleanser for wounds and abrasions and even as a rudimentary cosmetic beauty product. The early days of vodka spread in medieval times around Europe and became known by other names that referred to vodka as the Water of Life, Latin language countries named it Acqua Vitae, in Poland as Okowita and Scandinavia Akvavit.

Polish trade merchants introduced vodka to Russia and was documented so in 1533 with its description being a medicinal drink initially. Although the who invented vodka saga is hotly contested among the Slavic communities and this written record regarding Polish merchants taking it to Russia is one of the earliest records to date. Vodka production was a thriving business in Poland by the end of the 16th century with Krakow being a notable producer of the Water of Life but as time progressed Gdansk began to lead the field in production and by the 17th century it was exporting the most to neighbouring countries and beyond. In the 18th century a new and more sophisticated distilling method was used to raise the production of vodka to mass levels by adopting the alembic process which involved 3 distilling stages to produce a high volume of alcohol content to which water was added to reduce the alcohol content to around 40% proof of which most spirits are today. Clear vodka as in looking like water did not appear until the 1920s  by government approval and law, this aspect greatly improved the commercial aspects of vodka and an ensuing trend assured the popularity of this already centuries old beverage.

Vodka is traditionally made from starch or sugar based plants and Polish vodka prides itself on grain produced vodka using rye and wheat to obtain a superior quality in preference to other ingredients used like sorghum or corn. There are many stories of bootleggers and moonshine gangs making illegal and sometimes dangerous concoctions of vodka that are sold on the black market. So, regulations and laws had to be instituted to protect the legal producers and eliminate illegal organisations from, in some cases, killing people with their illicit products.

The first mass production distillery in Poland was opened in 1782 in Lviv which was part of Poland at the time by the Baczewski family and still a popular brand today even though the company almost disappeared during WWII in Poland and subsequent years remaining only with the Austrian distillery. Josef A. Baczewski revived the brand in Poland and laid claim to being the first ever large scale Polish distiller of vodka, hence, the new label of J. A. Baczewski on vodka bottles. 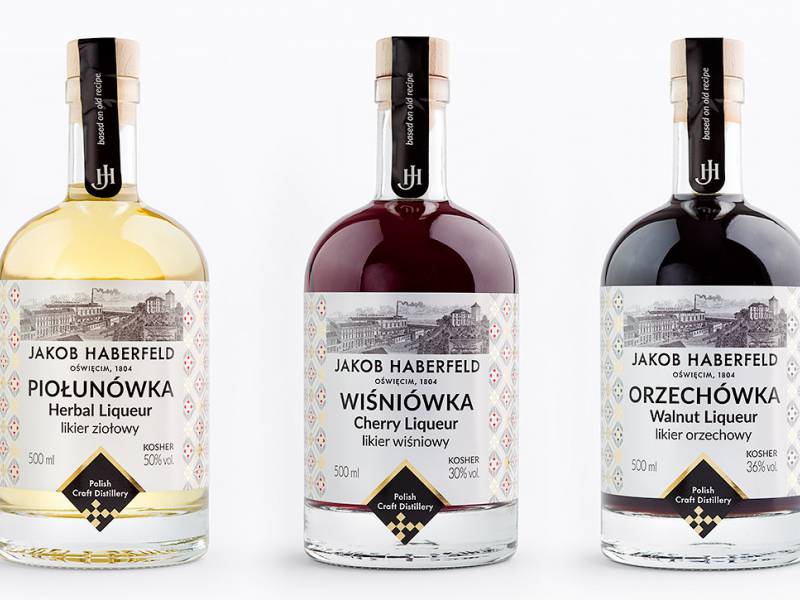 The next big production operation came in 1804 by Jakub Haberfeld in the city of Oświęcim which in German becomes Auschwitz where the infamous Nazis built their death camps in WWII. The Haberfeld’s became influential community members with a successful Steam Vodka and Liqueur factory, however, they were of Jewish faith and the Nazi invasion saw them loose everything and some their lives, the factory continued but under Nazi control. After the war the factory remained in production but went bankrukpt in 1989. In honour of the Haberfeld family a museum was opened in 2019 on the old factory site. You can still find the Haberfeld kosher vodka today produced by the Nissenbaum Family Foundation in the nearby city of  Bielsko-Biała. The most well-known brand of Polish vodka today is Wyborowa, this industrial distillery opened in Poznan in 1823 with Hartwig Kantorowicz as its innovative leader, he successfully exported the majority of the factory’s vodka abroad but maintained a small but discreet Polish market. The brand’s trademark was the first to be patented and by the 1930s had expanded into 23 markets including the USA post prohibition. The Wyborowa patented trademark appeared at many illustrious occasions and events, one being the inaugural flight celebration of the super jet Concord and in the film Love in the Afternoon with Gary Cooper and Audrey Hepburn. To promote Polish quality vodka the company came up with the ‘Miniatures’, a reduced size copy of a full size bottle of vodka and sent them to Polish Embassies to procure prospective clients, as we see today hotel room refrigerators contain a set of miniatures of most famous brands of spirits as a service.

The three above mentioned vodka companies are the first major industrial producers in Poland but there are many others that have contributed to good name of Polish vodka: for clear vodka a mention must go to Pan Tadeusz, Belvedere, Chopin and Luksusowa, they are all established top quality brands for you to try. Żubrówka Bison Grass Vodka, as the name says it has grass in it, the company claims their recipe dates back to the 14th century, actual mainstream production commenced in 1928. This company mainly offers vodka with flavourings, berry, cherry, raspberry among others but also recently introduced clear vodka. The bottled pre-flavoured vodka is very popular with the cherry (wiśniówka) an absolute favourite as an after meal digestive in restaurants or a shot glassful inserted into a pint of beer in the pub. The Sobieski brand named after King Jan Sobieski III, a national hero and monarch. Żołądkowa Gorzka, this brand is extremely popular in Poland and comes in various flavours as too does the Soplica vodka range. All these vodka manufacturers make clear or plain (czysta) vodka.

Whilst reading about Polish vodka is surely informative, it lacks the entertainment factor- therefore when in Krakow make sure to do some proper learning by attending a session of vodka tasting or even better -join the Magic of Polish Vodka show